John’s first message to me says “I’m a bold man.” This, coupled with the fact that he has Catholic values and beliefs, intrigues me. My first meeting with him is at a restaurant that serves “diner food with a twist.” The first thing I notice about him is that he is a quick thinker and keeps me on my toes. We have a great conversation and I feel both interested and wondering if I can keep pace with him. He invites me for coffee after, which I take as a sign things are going well. And then, on our way to our cars, I say something like, “Oh, yeah, we must have parked in the same area. I’m down this way too.” And then, as we get to the end of the block, John finds his car and I realize that either A) my car was stolen, or B) I totally forgot where I parked. “Yeah, I’ll be in touch,” John says, in a tone which I assume means, “Wow, you can’t remember where you parked? How is that possible?! Goodbye.”

The next week, I receive an email from him about having a picnic in his living room. I am won over by the uniqueness of the plan, although my roommates caution me not to go to a guy’s home who I have only met once. I don’t listen to them 😦

John answers the door and seems – much more relaxed to be in his home. He has two friendly whippet dogs who greet me at the door. We sit out on his front porch, 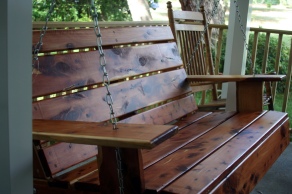 eating crackers and cheese, sipping wine. Minutes into our conversation, John encourages me to go across the street with him to meet his new neighbors. We spend hours showing each other YouTube music videos and talking about our favorite music. I feel very comfortable and at ease and lose track of time.

At the end of the evening, he very simply says, “I really like you, and I want to see you again. So, um, what are you doing tomorrow?” He confesses that he doesn’t really know how to go about dating, but I am secretly very happy that he is so direct (and committal) about his interest, after so many previous experiences of unclear communication.

Going home that night, I feel a sudden lack of energy about going on dates with other guys, because I am now more interested in dating John and seeing where things go. I am not ready to admit this to anyone else, though.

“Did you have a sense that God had led you two together?” was a question I would habitually ask my engaged friends. And they always said, yes. Often they said things like, “God told me I was going to marry him.” Sometimes, the circumstances had been so unusual, serendipitous, or perfectly timed, and that was how they knew. “You’ll just know,” almost everyone said. “But how did you know?” I asked, like many people before me, looking for some kind of data, quantitative or qualitative, with which to measure.

Because these were questions that perplexed me, and because those answers felt so vague, I want to be really honest about how I “just know.”

I don’t “just know.” I don’t have a deep feeling in my gut that John is “The One.” At least, not the way I thought it was going to be, like a deep primal recognition that my soul had met its mate.

But… our relationship feels different in some key ways:

One thought on “My Broken Road Part II: How I “know””